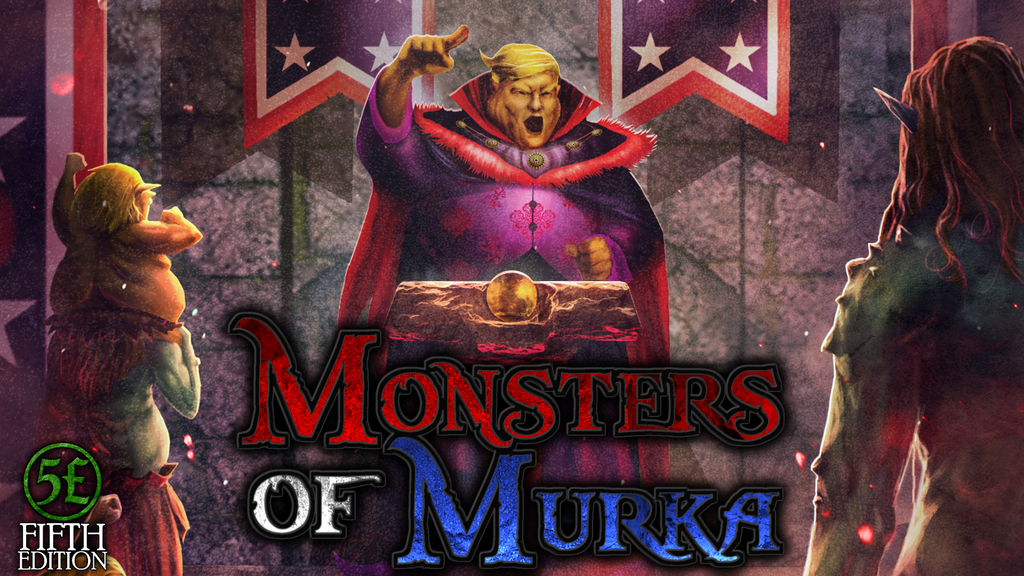 Monsters of Murka is a hilarious new campaign setting for fifth edition DND full of comical monsters, detailed maps, parodical mayhem, and political satire! This campaign setting includes adventures for first to tenth level characters. We were successfully funded on Kickstarter in June 2019, and we're stoked to share everything we're creating with you!

Latest Updates from Our Project:

THE BOOKS HAVE ALL ARRIVED!

There is now a chunky pallet in my garage full of hardback Monsters of Murka books, and this week the team and I are planning on shipping them out to everyone!

They're gorgeous, with embossed fronts. And the limited edition books? UGH they're to DIE for. SO beautiful.

Also, for those who may have missed it - the reason I've been quiet here is because...

I WAS BUSY RUNNING OUR KICKSTARTER FOR THE NEW MURKA EXPANSION

Monsters of Murka: Restaurants & Retail takes Murka to Flavor City, Walmoria, and the Hall of Murka. It is an absolutely HILARIOUS book, and the 18 writers behind it did such a GREAT job creating it. If you missed that campaign, don't worry - we'll open up pre-orders for it soon! We worked out a lot of kinks in the Kickstarter process this time. A great example of this is, we won't be fulfilling out of our garage again, and we know ALL the rules and specifics behind laying out a book (thanks again to JB of DropTheDie, our amazing layout artist, who killed it bringing the first book to life and is returning to bring this one to life as well).

Anyway, I wanted to thank all of you again. If it were not for you all believing in the core book, the second book would not be possible. If you want to keep up to date with things we do, consider following the Action Fiction kickstarter profile, as that's where we'll be running all of our Kickstarters from now on.


Thanks again to each and every one of you. Bless up.

Paperback books have gone out!

Check your email for a notification from DriveThruRPG, who printed and shipped all of our paperback books. They'll have your shipping info, and if you have questions about the fulfillment of your paperback books, you should direct them there! I'll drop some FAQs at the end of this update.

Don't forget to set yourself up to be reminded on launch day!

How do I check the status of my paperback book order?

I ordered more than just a paperback book, when will I receive my other rewards?

Let me just begin by saying, this update is a big one.

It's been a long-time coming, but damn if I'm not still in complete shock that we've made it. Really quick, here's everything I'm gonna touch on:

Today, on August 10th, 2020, I received our hardback proofs. And they're gorgeous.

As a friendly reminder, the foil on the limited editions that we send out will be gold, as advertised. But just... just look at it. Look at all of the glory in those raised letters, in the foil and pleather, in the COLOR of the PAGES. And shipping out in a mere 6 weeks (9 weeks for the new foiled limited editions)!

That's right, folks. The proof is in the pudding. The pudding being the new DriveThruRPG page, where you can see that paperback books are now available (and on sale, tell your friends).

Remember, if you backed for a paperback book, don't go buying one. You've already got one on the way from yours truly. They'll be arriving VERY soon, merely a week, maybe two. Depending on DTRPG's shipping time.

And now, for the big finale...

A new Kickstarter. Monsters of Murka: Restaurants and Retail, coming at you on Kickstarter September 8th! Hang out with the Flavor Savior, Guillame Fierre (who may or may not be the last of the flavor dragons). Check out a WIP shot of his art below, complete with his "Frost-tipped Spear."

Gang, we brought on 18 new writers to bring this book to life, and they literally blew me away with their work. I cannot believe how well they've done.

And things are gonna get... weird.

If you want to get an early look, make sure you've joined our Discord so you can be a part of the playtesting for all of the new subclasses, spells, feats, backgrounds, monsters, weapons, and magic items coming at you in the next big thing.

That's all I've got for you this time around. Cheers, and see you all on September 8th for some massive magical mayhem!

Monsters of Murka is about to get a whole lot tastier...

On September 8th, we'll be launching the Kickstarter for Monsters of Murka's first official, full-size expansion:

Monsters of Murka: Restaurants and Retail

Restaurants and Retail is comprised of three primary locations:

BUT WAIT, THERE'S MORE! It's also full of 13 new subclasses (some of which we snuck in below), and hundreds of new magic items, equipment, spells, diseases, and a bunch of other rad shit.

Flavor City is a magically-concealed town full of incredible food, powerful paladins, and the infamous magical saucerers—practitioners of the secret school of magic known as Gourmomancy.

Getting into Flavor City will be quite the feat, but once you're there, you're in for a treat! There's something about the layout of the town, though, and the presence of Guy Fierre, the Flavor Savior himself, which seems to imply that there may be more to this culinary wonderland. And just what the hell is a "Taste Beast" anyway?

The cheery-but-sterile front of the store eventually gives way to a massive underground labyrinth which seems to span the width of Murka itself. Laden with as many traps as treasures, many adventurers come here for mundane items, but the allure of magical gear proves to be too much for them. Be careful not to spend too long wandering the aisles, or you may find yourself an employee, serving the Manageri.

The Hall of Murka

The Hall of Murka lies somewhere in Midwesteros, where you can find as many Path of the Punk Barbarians as you can peaceful Urban Druids (the latter typically easily identified by the thick aroma of pannibus wafting around them).

The Hall of Murka is a combination dwelling area and collection of shops. The Hall has transferred ownership many times throughout the years (currently owned by none other than Tall Hammertoe, famed giant lumberjack), and each time a new layer of shops has been built on top of the old ones, pushing "last year's shops" deeper and deeper beneath the surface.

I just sent out a Backerkit update stating that we're locking down orders on Friday, and charging cards the same day. Our Paperback proof finally came, and they fixed the thing we needed them to fix, which means the paperbacks can start going out immediately!

What about the hardbacks?

Why delay the limited editions?

We just got word back from our printers (PrintNinja) and unfortunately, there was a mistake made when printing the limited editions:

They mistakenly pressed silver foil instead of gold onto the limited editions. Today, the team and I sat down to decide what to do about this - our options were to accept the silver foils and get the books to you on time, or delay an additional 2 weeks on the limited edition books in order to deliver the product that we promised. We ultimately decided that it was more important to deliver what we advertised and delay by two weeks to get it 100% right.

We apologize for this one - though it was out of our hands as a mistake made at the printer, it's still part of the on-going delays that you are all facing. COVID-19 plus our own delays outlined in our previous update video with JB have made this project an unfortunate nightmare in terms of delivering on-time.

So what's new? What have you been doing all this time?

In the time we've spent waiting to ship these books, however, we've been INCREDIBLY busy. So busy, in fact, that we're launching a Kickstarter for an expansion to Monsters of Murka that rivals the size and quality of the core book. This expansion is going to be bursting at the seams with flavor, and we think you're REALLY gonna love it. More on that very soon. (And if you've been in our Discord, chances are good you already know what's got me so Fieri--err... fiery.)